You are here: Home / Career Advice / We won gold

“I’m scared” was the first thing my son said to me yesterday morning. 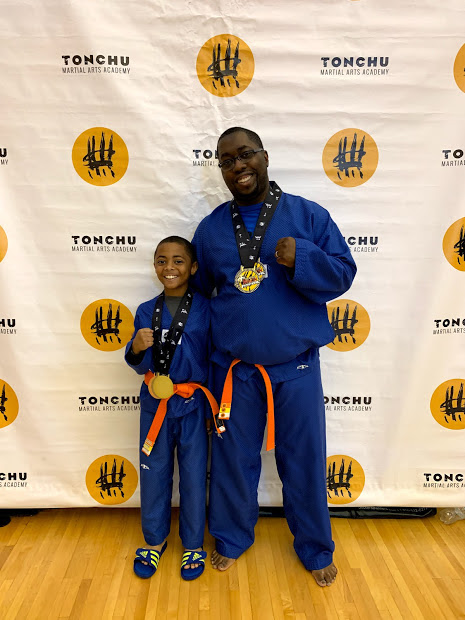 And again, I let him know he wasn’t alone because I was scared too.

When we pulled up, the parking lot was way fuller than I expected and we walked in right as my son’s sparring was starting. I think this ended up being a good thing because we had zero time for him to think about being scared because we were too busy trying to keep from being disqualified!

Speaking of disqualified, I actually go disqualified in the final for my sparring group for kicking too high. Before you get impressed, my flexible is still a struggle. It just so happens the other person was shorter than me and kinda ducked at the same time I was kicking…

I didn’t think the kick even landed but the judge said I touched the side of his helmet and that was that.

One image I can’t shake though was a mom and grandma getting after one of the young blackbelts because he decided to attempt breaking only 6 boards because a) he broke 10 last year as an even smaller kid and b) someone else in the age group had already broken 9, so 6 wouldn’t be enough to have a shot at taking home the trophy.

“We drove an hour for this”

“We don’t play for third”

And then after the still decided he only wanted to do 6 (and broke them successfully), instead of clapping like everyone else, one of them said “that was so stupid!”

I felt bad for the young guy, but the master facilitating called them out for it, which was good to see. I can only imagine how that car ride home went though.

Now I believe for sure in playing for the win, but not by applying paralyzing pressure but by giving the comfort to know that sometimes when you push yourself you fall short of your goal.

And as they day went on and even this morning, I’m still thinking about the exchange from the kid’s perspective but also how it applies to similar things I consistently see in business.

Managing teams and raising children are basically the same thing. (If you haven’t heard me say this before, this probably won’t be the last time.)

Having trouble seeing the connection? Think about these examples:

If you’ve never managed people before, this dynamic is something you need to understand before you take that next step.

And if you already manage people, remembering your team is in fact made up of individual people — not productivity machines cranking out sweet Excel models and slick PowerPoint decks — can actually help make your team more productive. Go figure.

p.s. If you’re looking for ways to apply some of the learnings on how to show up for people working for you, I have two options for you:

I’m a management consultant, MBA and CPA who has a passion for helping others in their career pursuits. Grab my FREE cheatsheet on 12 simple habits of highly successful consultants.